As we move into Half Term 6, our perceptions of the VIKINGS are changing.  We have learned of their culture, beliefs, values, trades and laws.  Now, we have the image of them raiding Britain... but looking to settle and start new lives.

In Viking times, the villages and kingdoms followed a system of justice where all disputes were settled at a massive thing called, well, THE THING.   Here, Viking people with complaints, accusations and feuds could put people on trial and seek retribution.

If you were found guilty, these were the available punishments:

Get pelted with rotten vegetables, insulted and made fun of!

You were exiled from the village and treated as a wildling.  You could be hunted and killed without punishment as an enemy of the village!

If you wanted to appeal, you could fight a DUEL called a HOLMGANG or face an ORDEAL:  Ordeal by fire, water or iron = gruesome trials with a tiny chance of success.  If you passed, you were innocent, but if you were guilty, you would be given an even WORSE punishment down the list above!

We have been writing speeches to give at the Thing, either accusing or defending villagers!  We've been working on showing our Topic knowledge and our Writing skills! 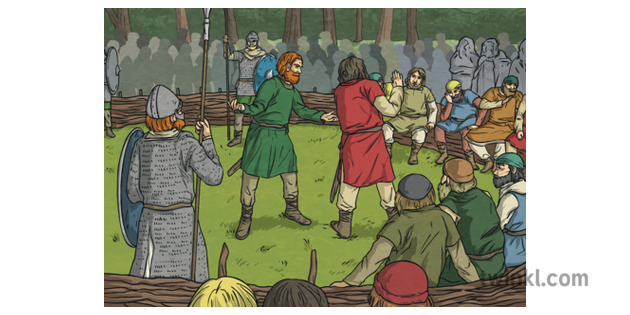 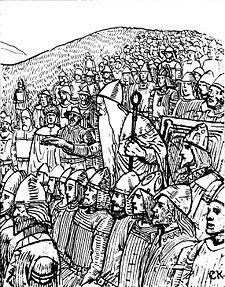 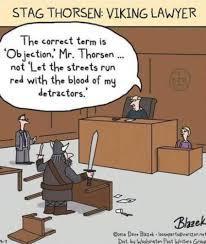 THE VIKINGS ARE COMING!!!

...So what does this mean, exactly?

We have a very direct mental image of who and what the VIKINGS were:  bloodthirsty raiders wearing horned helmets who came only to pillage, destroy and satisfy their insane bloodlust... right?    WRONG.

As Year 4 are learning, the Vikings were a complex and well-rounded civilisation of people, with proud traditions, complex mythologies that explained the gods and goddesses and beyond humanity (yet all too human, it turns out), well-developed ideas of social justice, the hegemony of society, class structure and progression, science and engineering, navigation and poetry, art, music and craftsmanship.

Plus, they did NOT have horns on their helmets!

As part of our Viking studies, we have created our own village of ENHET, which means UNITY in Norwegian.   If you fancy a tour, click on our link below!

STAND AND BE RECOGNISED!

We have each created our own characters as part of our Viking Village, so if you ask any of us, we will be happy to describe ourselves to you, including such amazing details as:

* Our name and nickname

* Our most treasured possession

* Our STRENGTH, AGILITY and CUNNING

* Our dark secret that we're keeping from everyon-(whoops - I mean nothing!)

Through all our studies, our characters grow, develop, progress, learn more and have adventures.  These link in with all our cross-curricular learning and help to enrich our whole curriculum.

CHALLENGES OF THE GODS

We even face challenges set by the Viking Gods and Goddesses to test our teamwork, determination, ingenuity and courage.

So far, we have faced:

THE CHALLENGE OF SKADI AND TYR = Winter has come and our village has been beset by dreadful snowstorms.  A mysterious ice-bear has been seen roaming the forests nearby.  What is Skadi doing?  How is she testing us?  Will Tyr give us the courage to face this beast before it threatens our home?

THE CHALLENGE OF THOR AND ODIN = Our valued blacksmiths, whitesmiths and yellowsmiths need iron, silver and gold ore to create our tools, weapons, armour and jewellery.  However, a far-away volcanic eruption caused an earthquake that itself caused a landslide at our mine, burying many of our hard-working villagers!  Trapped beneath tons of rock, how will the village rally together and form plans to save them?!